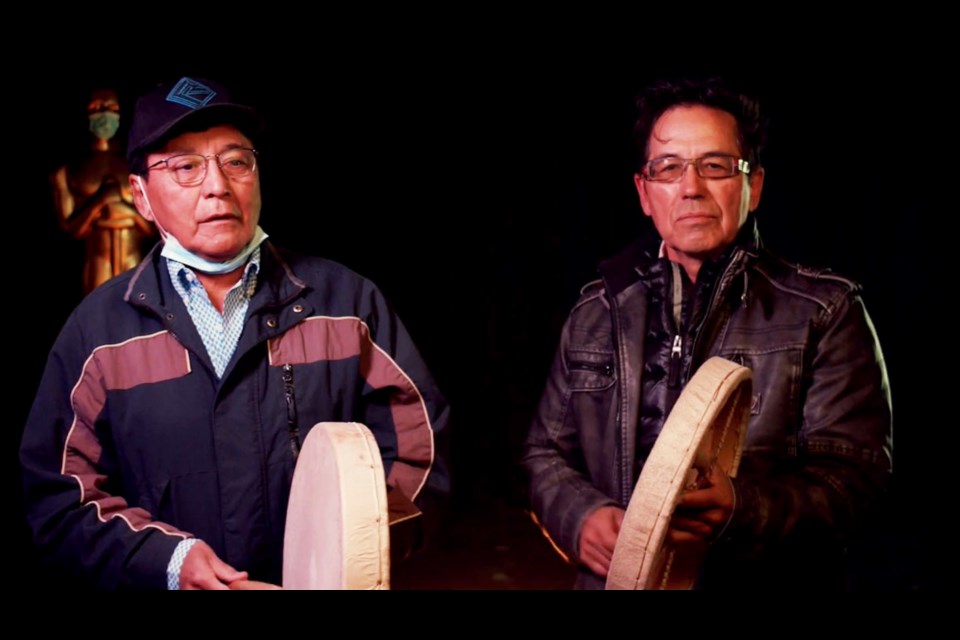 Here are the winners:

Mayor’s Citizen of the Year

The Covid-19 Seniors Task Force was named Mayor’s Citizen of the Year for its response to Covid-19, supporting seniors and those vulnerable in Fort St. John so they could stay connected to the community and keep informed of what was happening throughout the pandemic. The group also contributed to a senior’s needs assessment, and provided meals to seniors.

Mayor Lori Ackerman called the group ‘thinking partners’ to one another and the community at large, helping to solve problems that challenged community organizations. The Task Force delivered prescriptions, prepared and delivered meals, arranged transportation, and made phone calls to seniors, checking in over the Christmas holidays.

“All of us worked hard, and were already doing things in the community. We really appreciate being brought together in this collaboration — there was so much more we could do as a group,” said Laura Beamish.

“This is just the beginning. We are going to continue to work through the next phase of this pandemic, but we’re also going to continue after to try and meet the needs of all the older adults in the community. It was a real privilege to get to work with all these different organizations and people.” 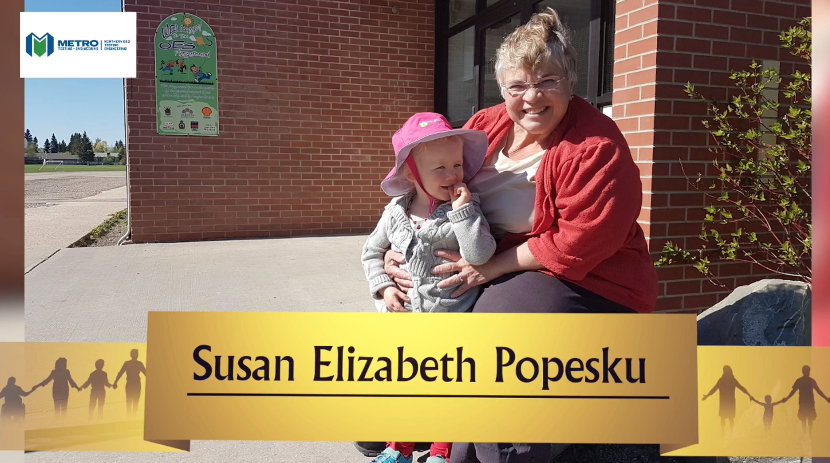 Sue Popesku was posthumously awarded the Lifetime Achievement Award for her work bettering the community for more than 40 years in the arts, theatre, heritage, and tourism. She was a founding member of the Peace River North Festival Association, executive director of the Fort St. John Hospital Foundation, and member of the Fort St. John Arts Council.

She was instrumental in building the North Peace Cultural Centre and bringing a professional quality theatre to Fort St. John, and in establishing the Fort St. John North Peace Museum. She was a founding member of the High On Ice Festival and other festivals and programs. She continued working with the Arts Council, Stage North, North Peace Cultural Society, and the Peace Liard Regional Arts Council until her death last April.

Popesku was a mentor and supporter of countless community members who wanted to start their own project, and did so with optimism and enthusiasm.

“I just wanted to say thank you Jason, your mom was amazing, and I know this city would not be the same if she weren’t here,” said Sloan.

“Thank you to the community. Mom loved Fort St. John,” said Jason. “She loved the arts, and growing up, she was always doing something.” 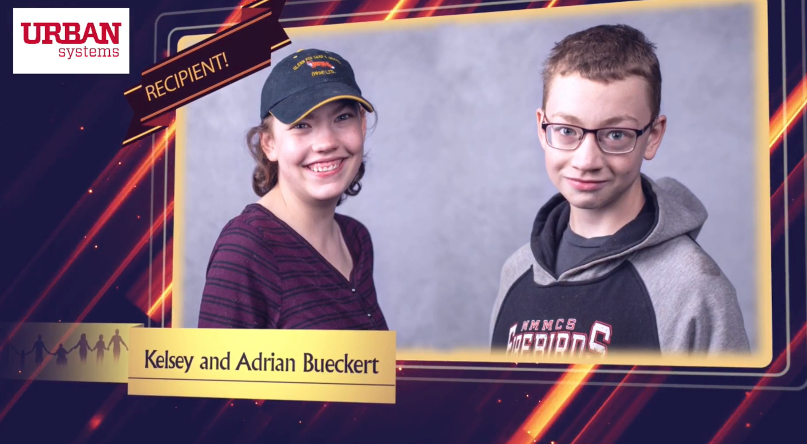 Adrian Bueckert and Kelsey-Lee Bueckert received the Youth Award, and recognized for the Christmas parade they organized for 10 nights in order to bring Christmas cheer to families during Covid-19 restrictions. They inspired others to join in as the nights went along, and residents began to look forward to the nightly parade. On their last night, December 22, they were joined by 10 other vehicles, including two riders on horseback.

Adrian and Kelsey-Lee, along with driver Dave Helton, felt good about winning the award, and worked on their floats every chance they got. 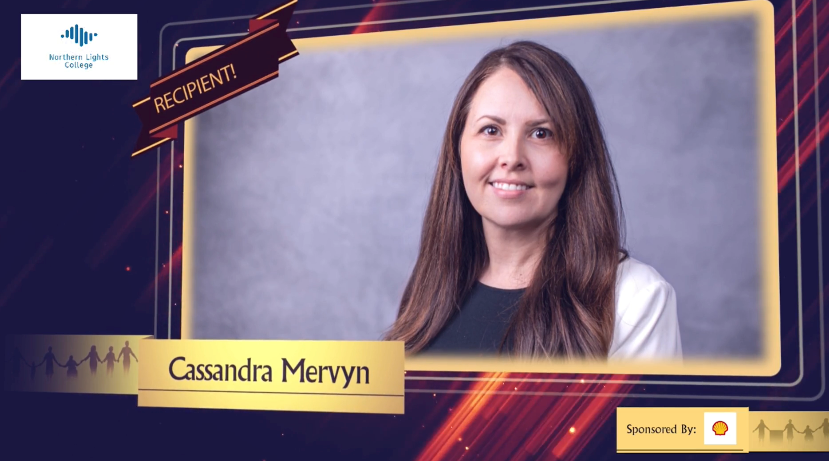 Cassandra Mervyn won the Arts and Culture Award for going above and beyond when schools closed due to Covid-19. A kindergarten teacher, Mervin invested her own money to create her own Youtube channel, Ms. Mervyn’s ArtHouse, and purchased new equipment to enhance her virtual tutorial videos.

Her channel puts on contests, fundraisers, and donates money to the Fort St. John Women’s Resource society, seniors, and the Transitional Housing Centre. She is passionate about teaching, and helping kids express themselves through art, creativity, and kindness.

“I’m completely humbled,” Mervyn said. “When I think about pandemic teaching, I didn’t feel like I did that. We all did as teachers, but we were all feeling like we needed to do more.”

Mervyn said her main focus was making sure her students felt a connection to each other and their teachers while they were at home away from school.

“I met with my class every day, because I felt like the connection was important,” she said. 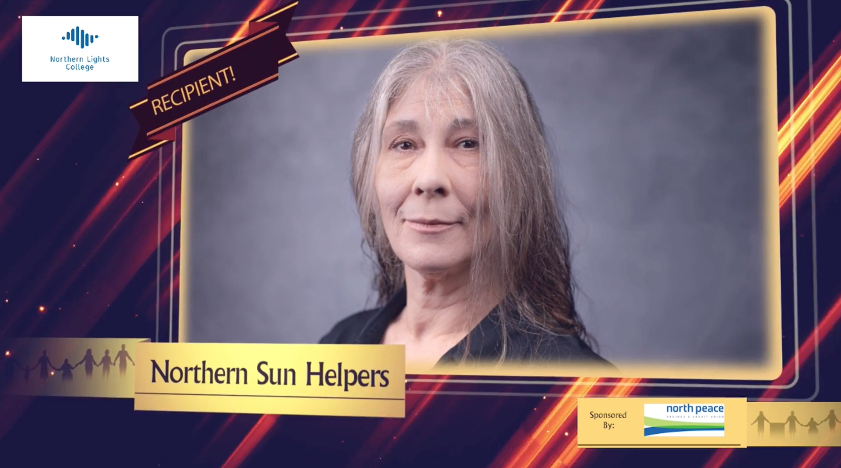 The Northern Sun Helpers won the Humanitarian Award, a peer group focused on harm reduction and addresses the opioid crisis in the community. They give those in need access to lunches, showers, and other basic necessities. The Northern Sun Helpers advocate for those with addictions, and supports families of those with addictions. They are members of the Fort St. John Community Action Team.

“I’m honoured, overwhelmed, but my being here has been supported by a whole lot of people,” said Northern Sun Helpers President Pamela Romanow.

Runners up were the Fort St. John Women’s Resource Society, and Maxine Mease, an aboriginal homeless outreach worker and organizer of Coldest Night of the Year. 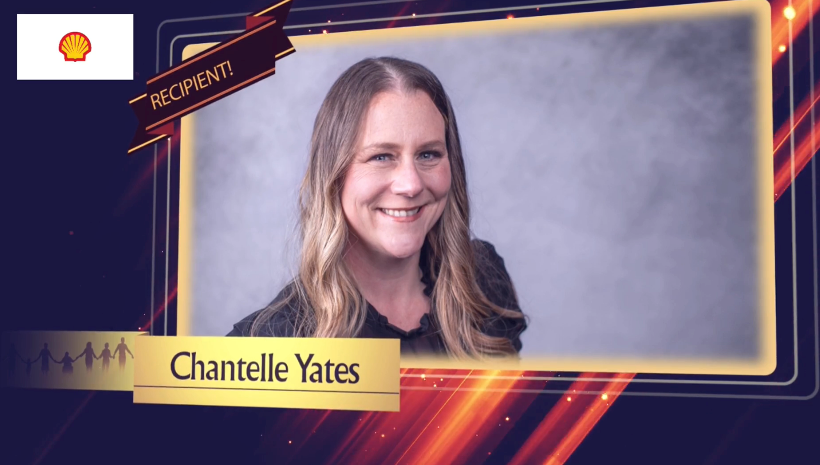 Chantelle Yates, president of the North Peace Gymnastics Association, won the Recreation and Sport Award. Yates worked tirelessly to keep the doors of the gym open, all while making sure staff were supported and public health procedures were followed. She continued to work with people of all ages to provide access to gymnastics throughout the pandemic, and did so with a cheery and positive attitude.

Yates said she and everyone at North Peace Gymnastics had to  think outside of the box to make sure as many kids could participate in gymnastics as possible.

Runners up were teacher and athletic trainer Phil Hiscock, and Nicki and Bailey Haugan of The Sweat Box. 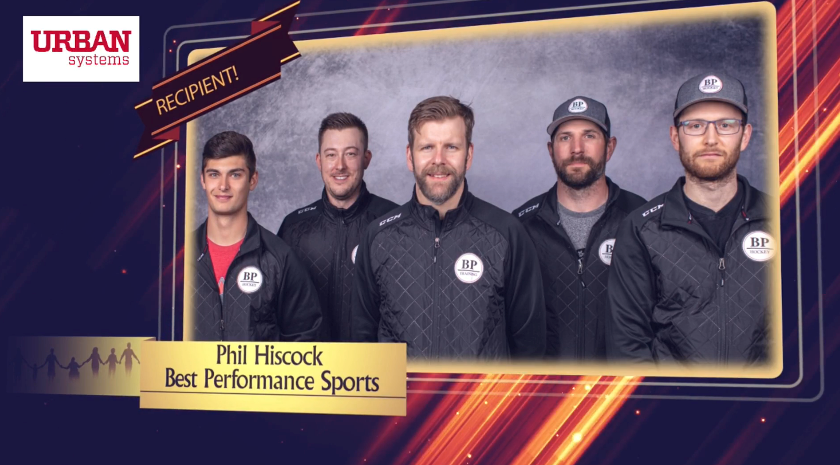 Best Performance Sports won the Business Award, and was recognized for providing a free online program to athletes, families, and the public, while city recreation facilities were closed at the start of the pandemic. Phil Hiscock moved his annual summer hockey camp to Tumbler Ridge when there was no ice in Fort St. John so that kids still had a chance to participate in hockey camps close to town.

“It’s a pretty awesome feeling. We love this community, and we love what we do, so it makes it pretty easy,” Hiscock said.

Hiscock said not doing anything to help athletes, from youth to adults, was never an option.

“We needed to make sure all of them were supported as much as possible, and it was really neat to see everyone come together as a community and support each other online when we had to,” he said.

There were more than 30 nominees for this year’s awards.

The ceremony opened with a musical performance by Adam Winn, greetings from Doig River elder Sam Acko, a drum performance and honour song by Doig River Councillor Garry Oker, and a message from Mayor Lori Ackerman.

The awards also featured a panel discussion with COVID-19 survivor Tracy Paquette, Darrel Key, Paramedic Chief for BC Ambulance in Fort St. John, and Jared Braun, Executive Director for the Salvation Army, who spoke on the kindness that emerged in the community last year in reaction to Covid-19.